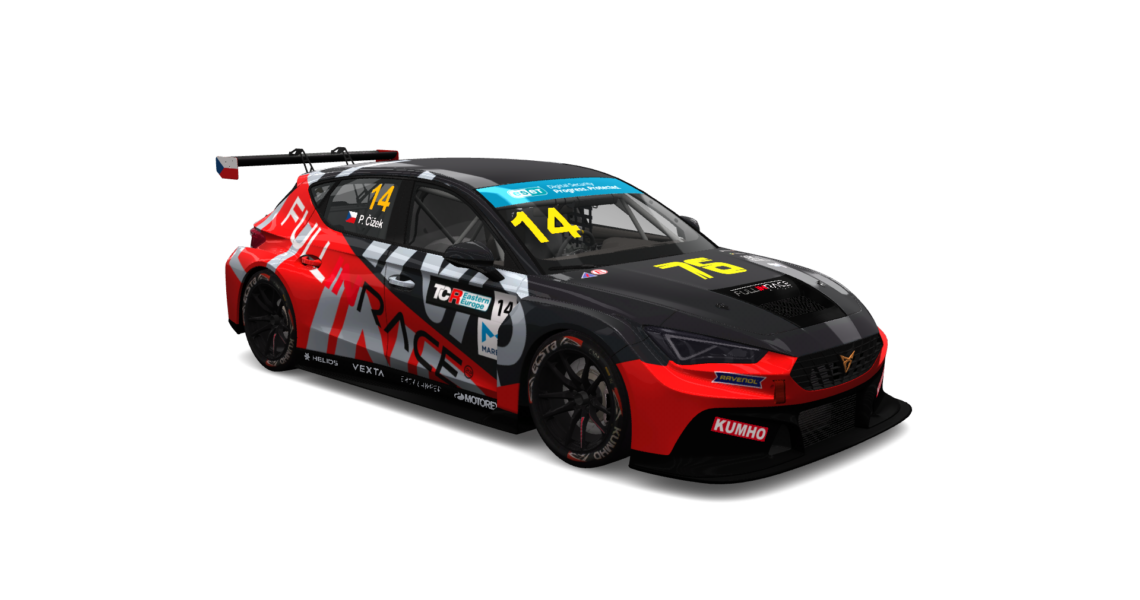 In 2013 SEAT Sport introduced a concept car, based on the third generation of Leon. Initially it was thought that this would be the car in which SEAT Sport would return to the series with full manufacturer team under the new TC1 regulations. However, SEAT Sport announced that the car would be part of the revived Leon Eurocup for 2014.
The Leon Cup Racer then formed the base for the newly formed TCR International Series. The TCR regulations use this car as a template for the aerodynamic portions of the cars. In 2016 SEAT Sport introduced a TCR-spec version of the Leon with the original Cup Racer still being eligible in the International Series as well as national and regional championship utilizing the TCR regulations. Cupra Leon Competición is the latest version of TCR spec car from Cupra (Seat Sport) introduced in year 2020, updated for 2022 season.

People who follow our work a little closer know that we are very positive about FWD cars and close metal-to-metal racing not only on virtual tracks, but even in real life. We are in close touch with FULLINRACE Academy racing team almost from the beginning of our existence and our cooperation brought some interesting mods to the AC scene, especially well-known Octavia Cup. As our modding skills are evolving and improving, the FULLINRACE team does evolve as well. Currently they compete in TCR Eastern Europe competition and in 2020 they introduced this new beautiful car from Cupra to the Eastern European racing tracks. We thought it would be awesome to get advantage of it and bring this awesome car to Assetto Corsa simulation as well. So, after couple of months of hard work we are proud to present Cupra Leon Competición 2022 specs to the AC simulator.

This mod is not “vanilla AC compatible” anymore, you need Custom Shader patch 0.1.79 and higher installed! This mod contains slightly improved skins from previous 1.2 version and a lot of new real life TCR Eastern Europe and TCR Europe skins together with some fictional skins.

This “2022” version of the TMM Cupra TCR mod is a standalone mod and won’t overwrite the old TMM Cupra 1.2 version!

We strongly recommend to map these buttons to get all the extended features of the car (Content Manager/Settings/Assetto Corsa/Controls/Patch:

Launch control helps with the starting procedure by reducing max RPM to lower value. The LC button needs to be held in order to restrict revolutions of the engine to 5200 rpm and will automatically disengage when car reaches 70 km/h, or when the LC button is released before reaching 70 km/h. If the front wheels are not in working temperatures, slight wheelspin can appear even with LC on.

By default, the mod is set to Cupra factory settings with stiffer springs and ARB settings used by FULLINRACE Academy at Slovakiaring track.

When setting up the car, start with front tires temperature and pressure. Be sure that after couple of “installation laps”, your tire pressures should be around 31 PSI on both axes. Don’t bother with rear tire temperatures, on FWD car rear tires will be always colder than front tires.

When adjusting fuel amount check your ride height and adjust it if needed. Default ride height settings are quite low and when adding fuel, the suspension can go under lowest allowed value. By adjusting the ride height, you can influence overall aero balance of the car.

If the track is fast and does not require extra downforce, we recommend to use values of -2 to -4 on rear wing and 0 on front splitter.

Camber, toe and dampers are set to factory default settings. Camber should be adjusted in a way that the difference between temps of the tire will be split evenly between outer, center and inner part of the wheel. Recommended settings for toe are negative values for front axle (-0 to -0.10) and positive values in the rear (0 to +0.15), according to tire heating and wear. Playing with toe values can influence the turn-in capabilities and stability under braking.

Brake balance range with extended brake physics are now in real range of 50-60%. We recommend to map buttons to increase and decrease brake balance while driving, and adjust it according to the handling of the car and actual conditions on the track. If you are locking your wheels or you feel like the car is not braking enough, you can adjust the brake balance and/or brake power (in range between 80 – 120%). Keep in mind that the mod does not have ABS or TC in factory settings.

Differential preload factory settings are quite low, we recommend using values between 85 – 105Nm.

Templates for skinning are included in “Templates” directory and are in Photoshop (CC 2020) PSD format. Basic body template is provided in 4096x4096 resolution. All textures should be saved in DXT5 DDS format.

Skins from previous version (1.2) are just partially compatible. Body texture can be used with just small adjustment to Cupra logo in rear trunk (logo was removed in 2022 version). External decals and window labels should be fully reworked to new template, they are not split between body texture and windows decals texture anymore. Tire texture mapping was changed as well, you can find all used texture variations in the PSD template.

Big thanks to SQUIR Team for exterior 3D model, SHR Modding (ACFan) for sounds, thanks to all consultants, contributors and people who encouraged us and helped with feedback and testing and the whole FULLINRACE Academy racing team for allowing us to gather data from the vehicle and to provide us with valuable feedback.

Special thanks to Pavel Gellner for the physics consultations and for providing us with very valuable data, Petr Cizek (FULLINRACE Academy), Bartek Groszek (Aditis Racing) and Maxime Delfosse (Comtoyou Racing Team) for all the help and very valuable feedback about the handling and Kumho tires.

Do not modify, convert, reupload to other websites or use any part of the physics, 3D mesh, textures or sounds without our permission!